I ran off to the desert for some fresh air, big spaces, and mostly just to feel like I could. My first national park.

Winding my rental pickup truck up from Twentynine Palms as the sun set, I realized I didn't have any mental image of what to expect in Joshua Tree. I was in awe of what was greeting me around every rock formation, and I was already, suddenly, in this thing, in the big getaway I planned just before the start of my summer off from work. My entire knowledge of the place was that 1) it's beautiful and spiritual to a lot of people, 2) the U2 album, and 3) it's desert I think. Ok, 4), there are trees called Joshua.

Now completely dark -- dark dark -- I drove past the gates into Jumbo Rocks Campground at a crawl, wondering how I'd find my campsite and not hit anything I shouldn't, even with my headlights on. A few turns became a few laps. I obviously needed a map, my paper park map didn't have campground details, and my iPhone stopped getting service about 20 miles prior.

So, it was back to the campground entrance for me, to snap a photo of the posted map, pushing my safe arrival at Site 27 to around 11pm, after about 12 hours of travel from my front door. Home sweet home, for the next few days. 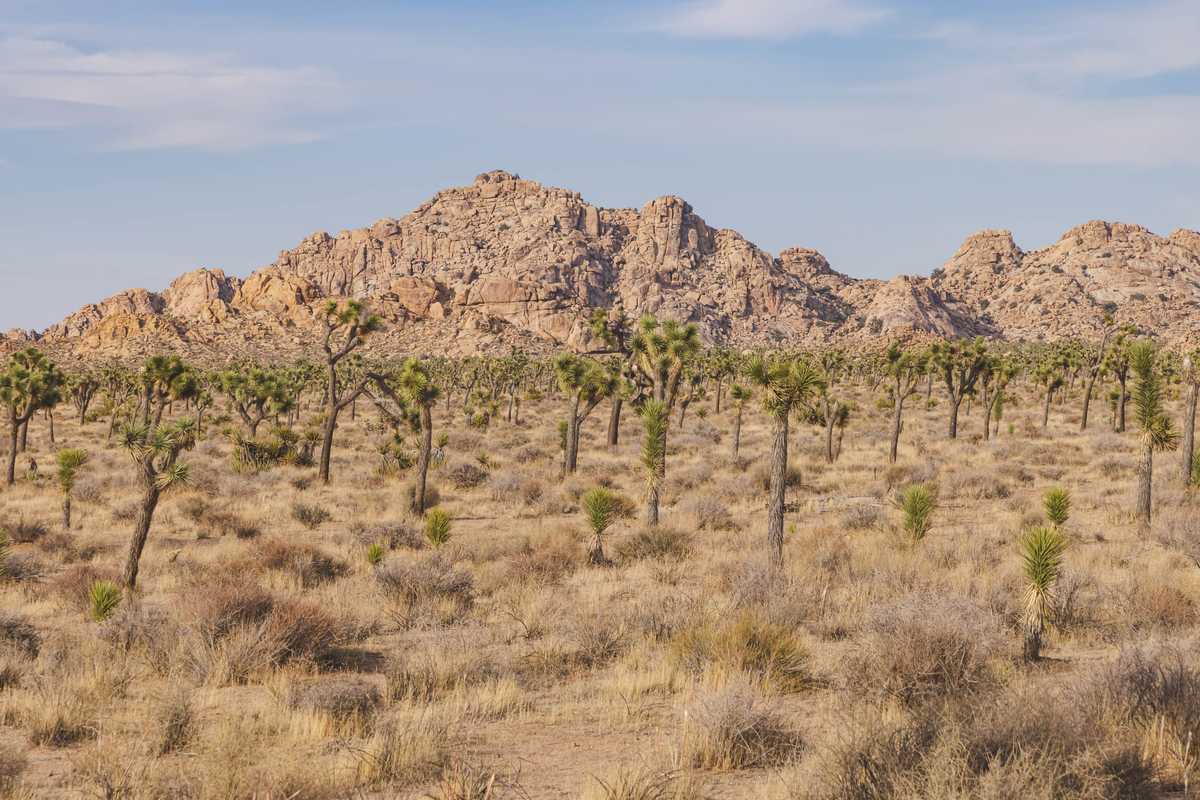 I visited in late May, so I missed the summer heat which averages around 100 degrees. Still, on two of the four days of my visit, the high was in the 90's, and when everything around you is stand and rocks, and you haven't seen a cloud in three days, it's plenty hot to discourage anything too strenuous between about 10am and 4pm.

So, naturally, two of my favorite hikes were around noon, including one up the side of a mountain.

On my first day I headed out to the Desert Queen Mine, a couple of miles round trip into what feels like open desert, surrounded by scrub, birds, and bugs. The mine isn't super exciting visually, but it harkens back to the heady days of the Wild West and gold-rush era California (and rampant dispossession of Native Americans whose history gets some billing around the park). I enjoyed an hour or two in what felt to me like a video game or movie set.

I took many other short hikes in the five days I spent in Joshua Tree, with trails winding through brush out into the Mojave. Most of them were almost completely silent aside from the sound of walking on sandy ground, surrounded by tall, sentinel-like Joshua Trees, yucca plants, and other brush, with blue skies hung overhead like a blanket. 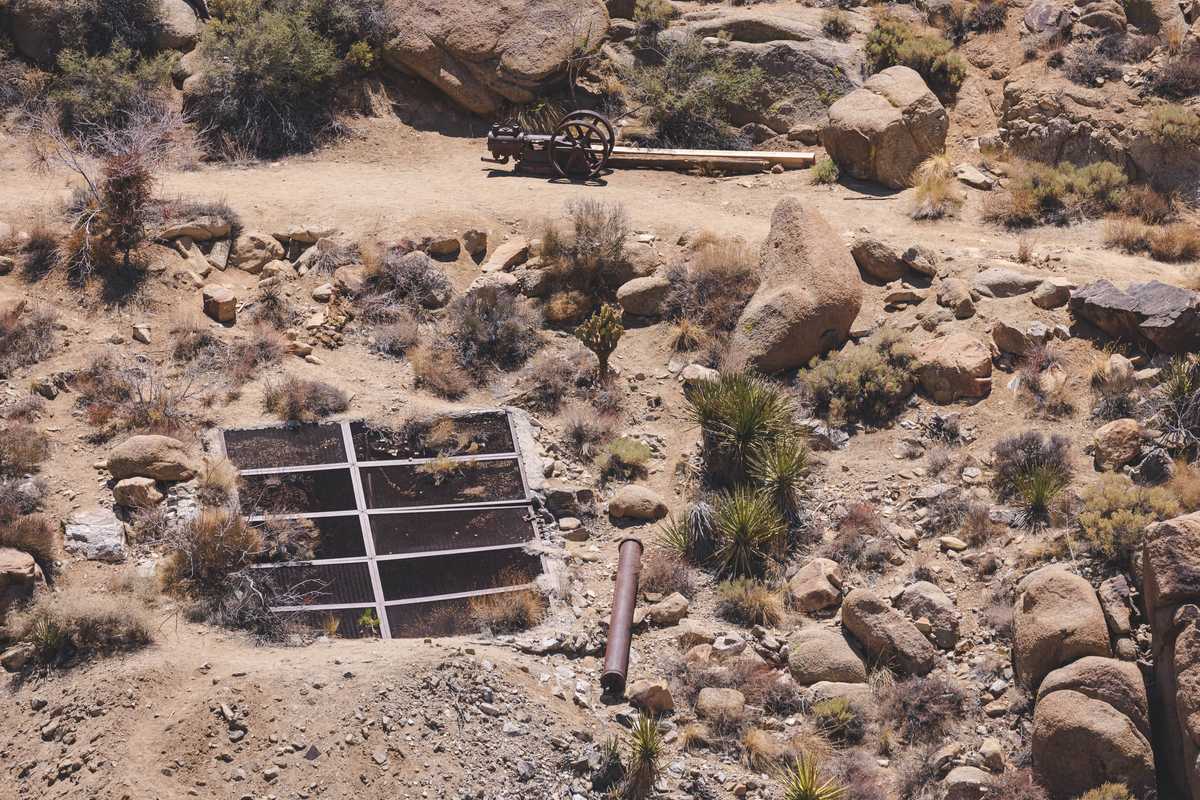 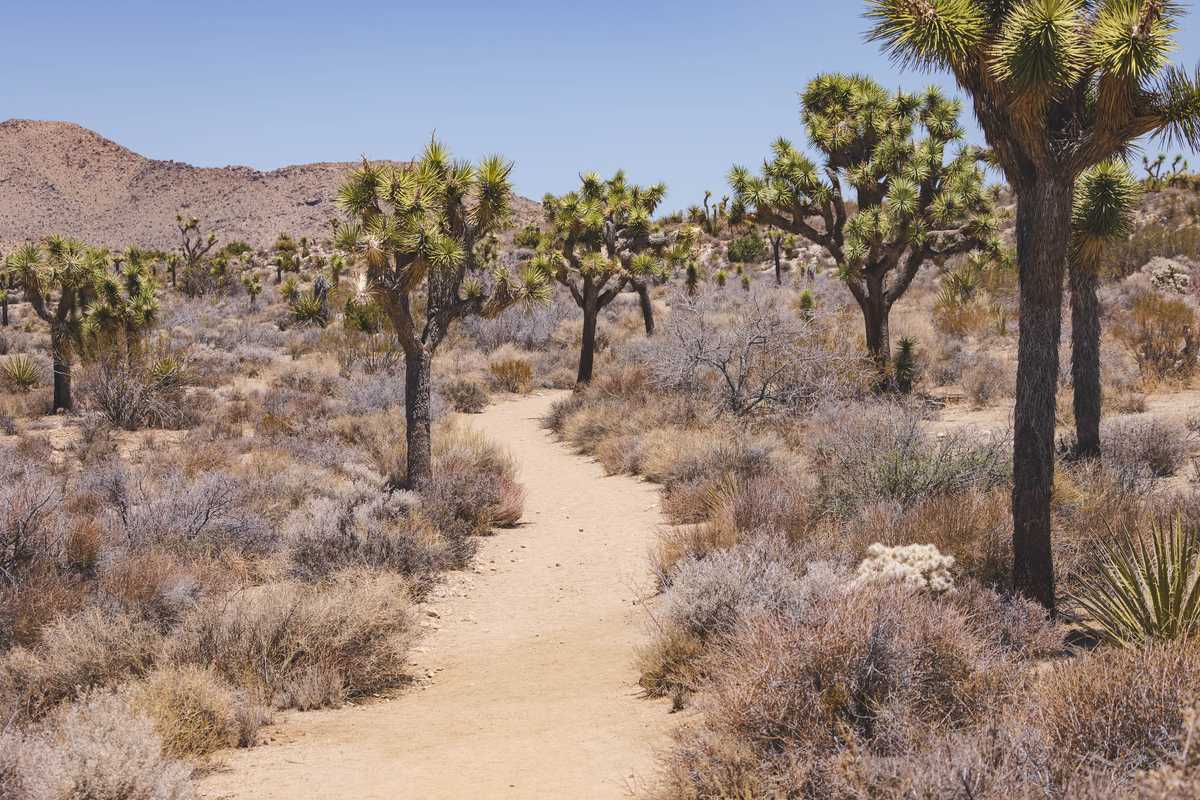 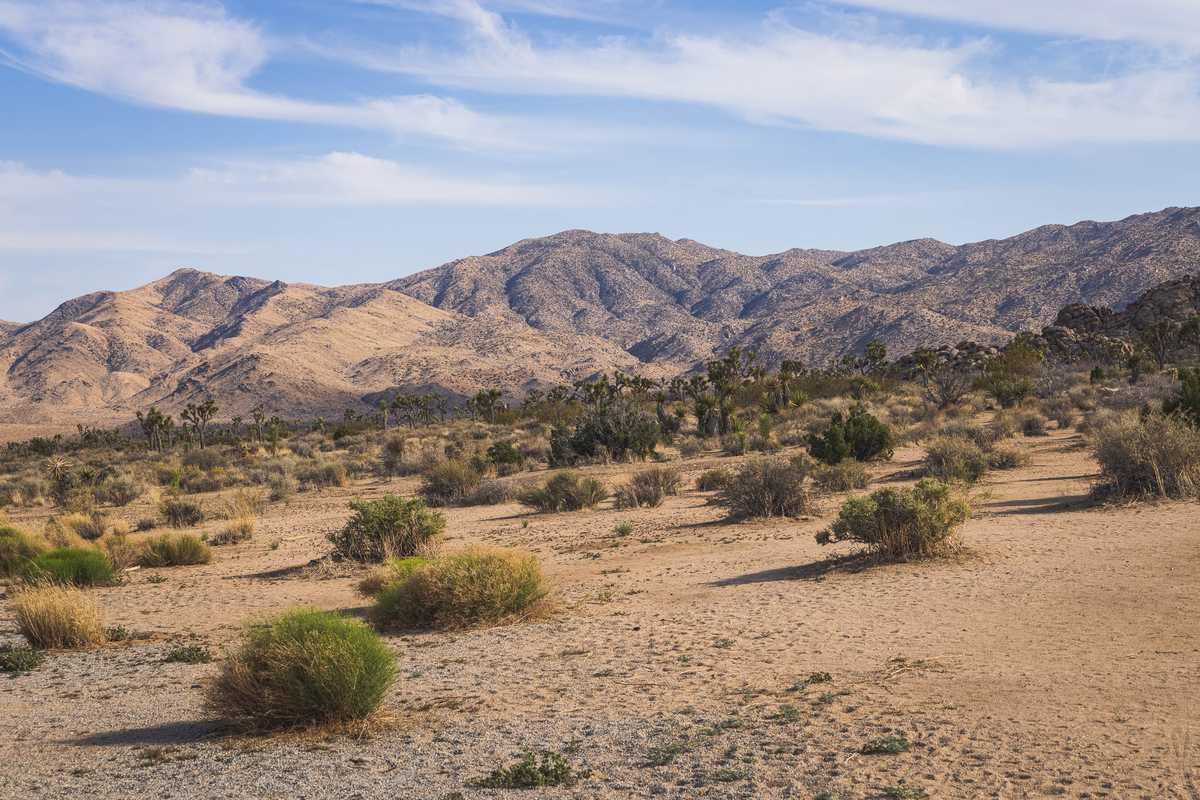 But my favorite part of the entire trip was hiking to the top of Ryan Mountain. It's about a three mile hike round trip, cut up the side of a mountain in a fairly well-maintained trail, which was just sporty enough to wake me up to enjoy the incredible views of nearly the entire park from the summit.

I stuck around for about four hours, chatting with other hikers, taking photos, and reflecting on different experiences with life's other journeys. It's the best place I've ever watched a sunset and one of my favorite experiences of my life. 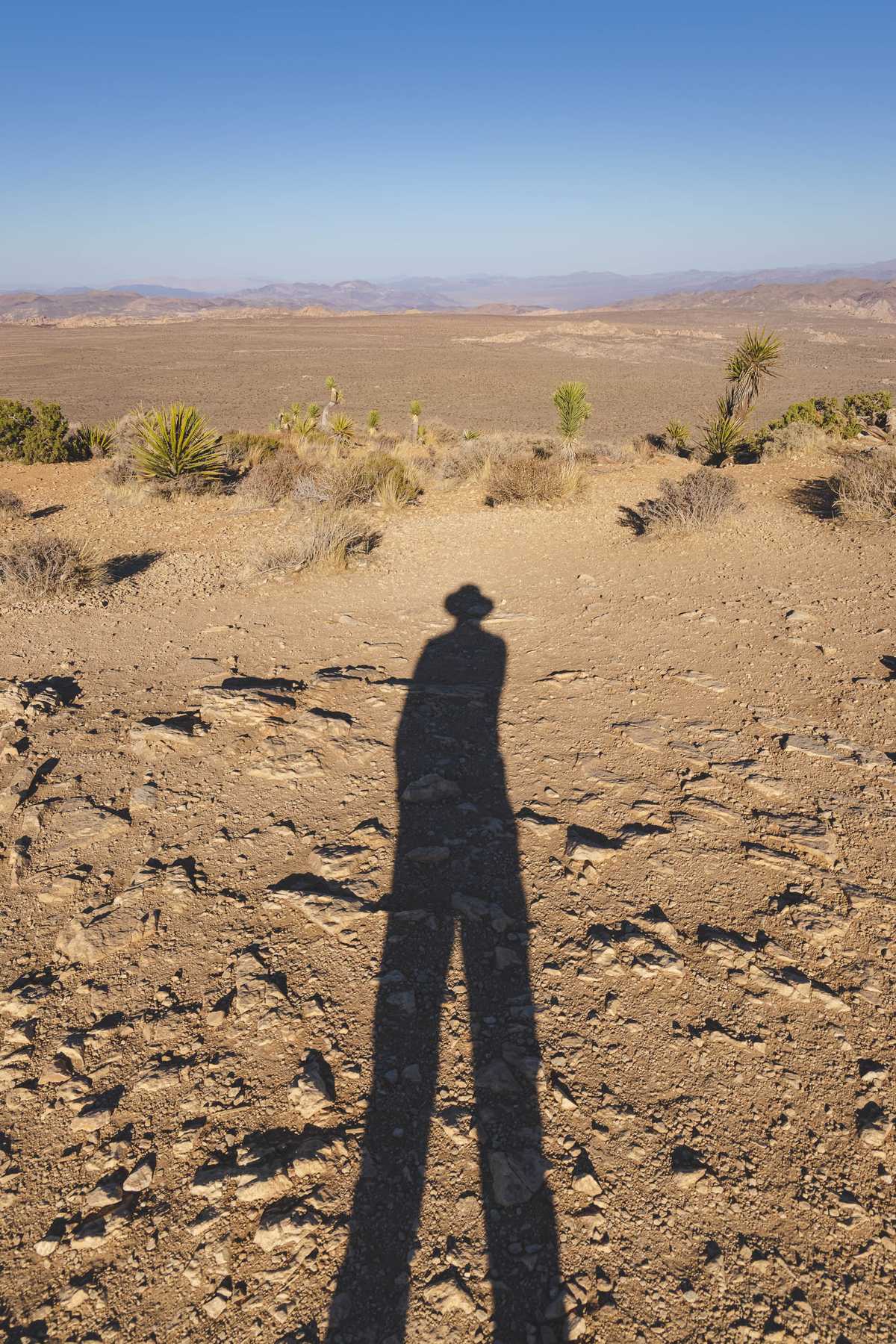 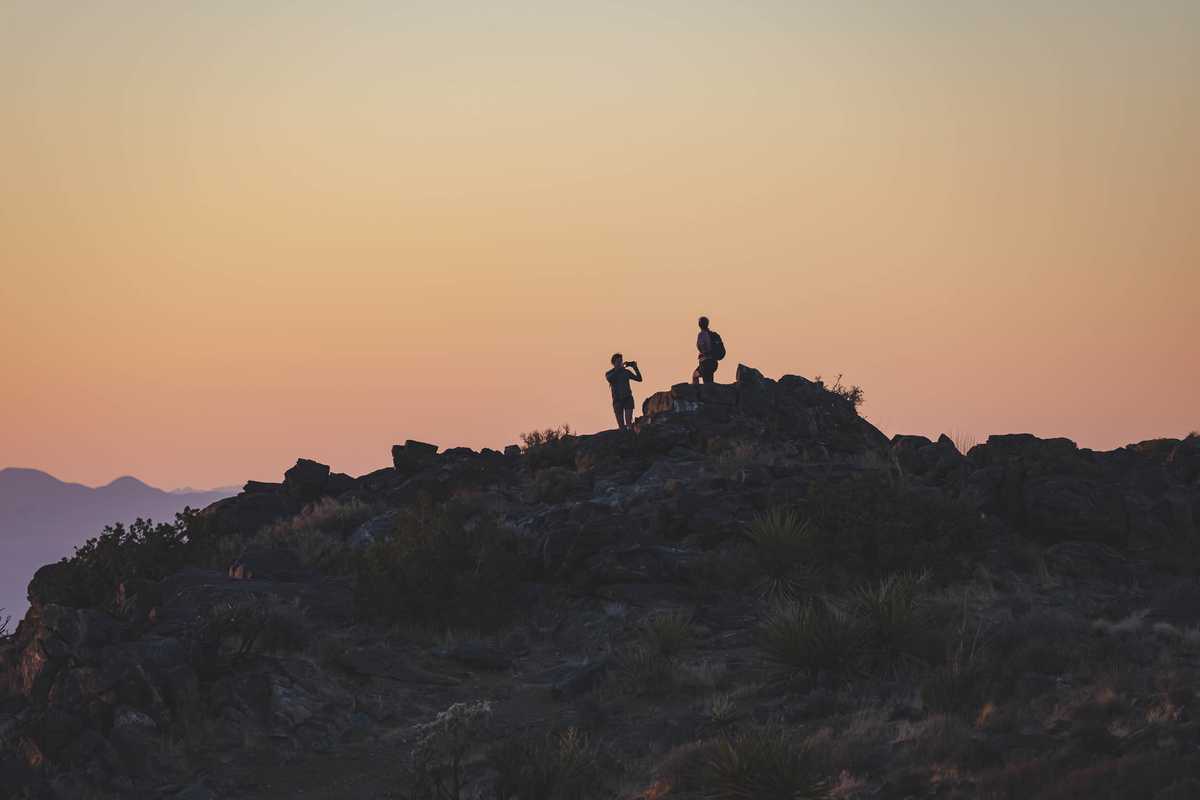 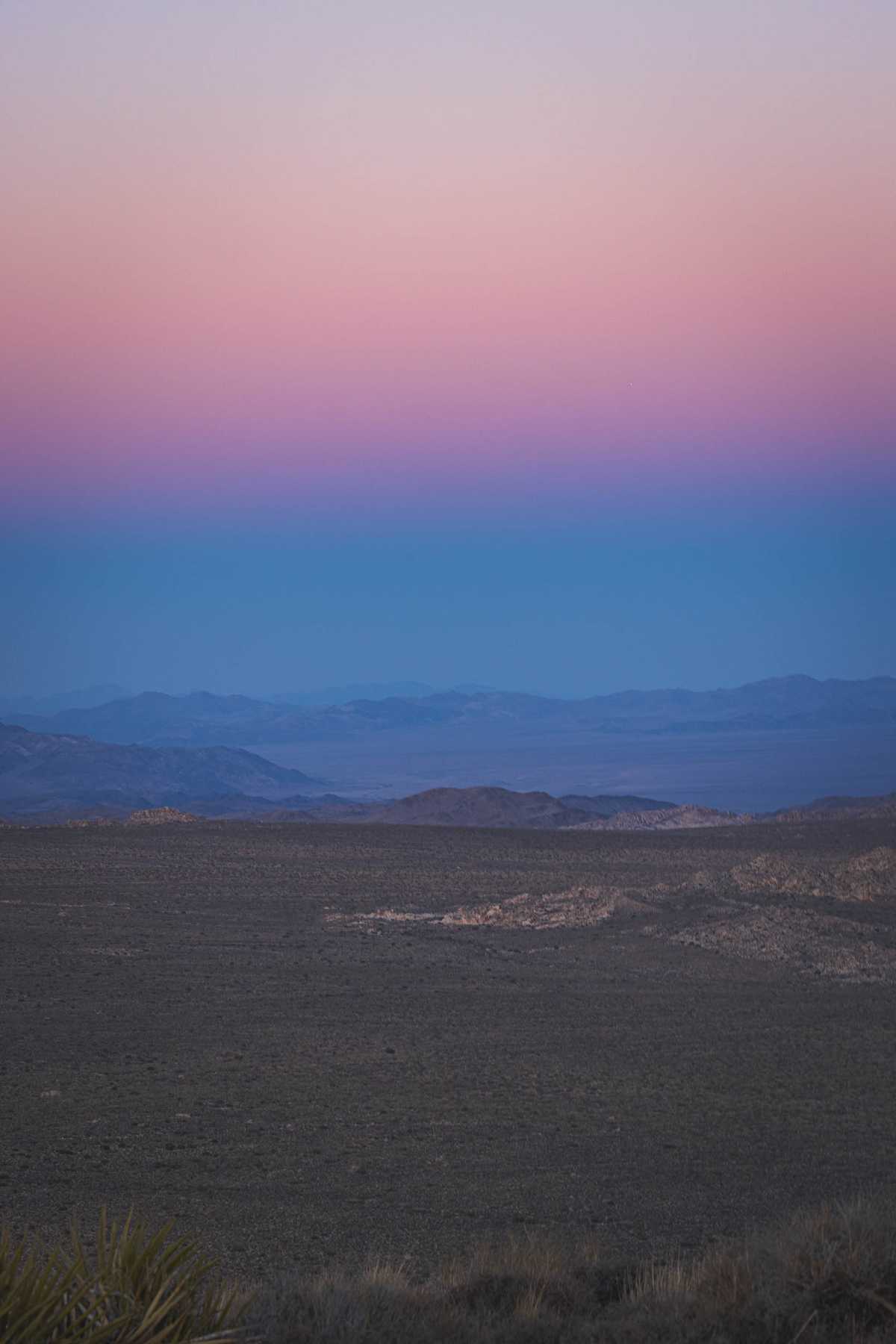 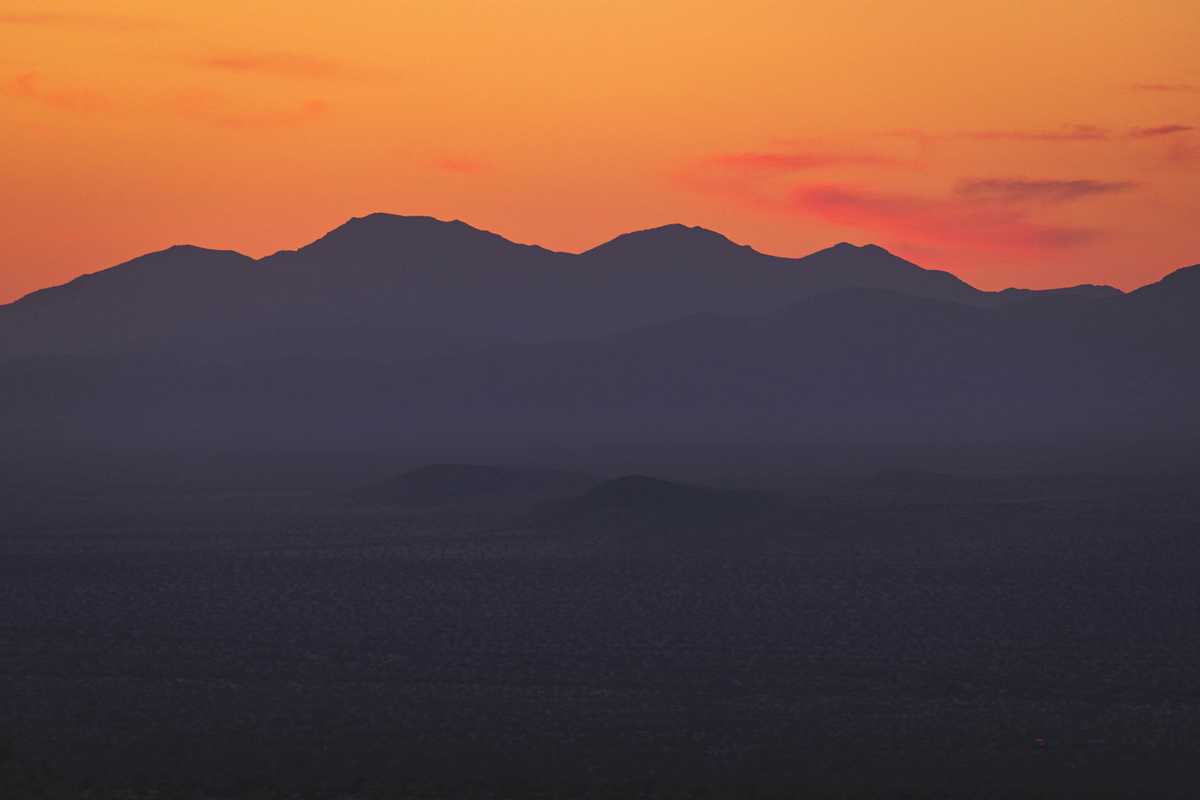 I was constantly surprised at how much life was in the park, but not especially shocked that some of the animals I saw had adapted to being constantly visited by well-outfitted humans, like the coyote that came back to raid my neighbors campsite three different times while they were off hiking (or was it three coyotes in cahoots?). I found out each time when the ground squirrels would organize, squeak signals to each other, and pop up on top of the higher rocks in the vicinity.

I also saw bats, pheasants, owls, snakes, and a huge amount of mice and mouse-like critters that seem to always scurry across the road in twilight hours as soon as you get near (seriously, obey the 25mph speed limit and have your foot on the brake). I was sad to avoid tarantulas but my brother went later in summer and saw at least one. The plant life is also dense and lush considering you're traversing open desert. 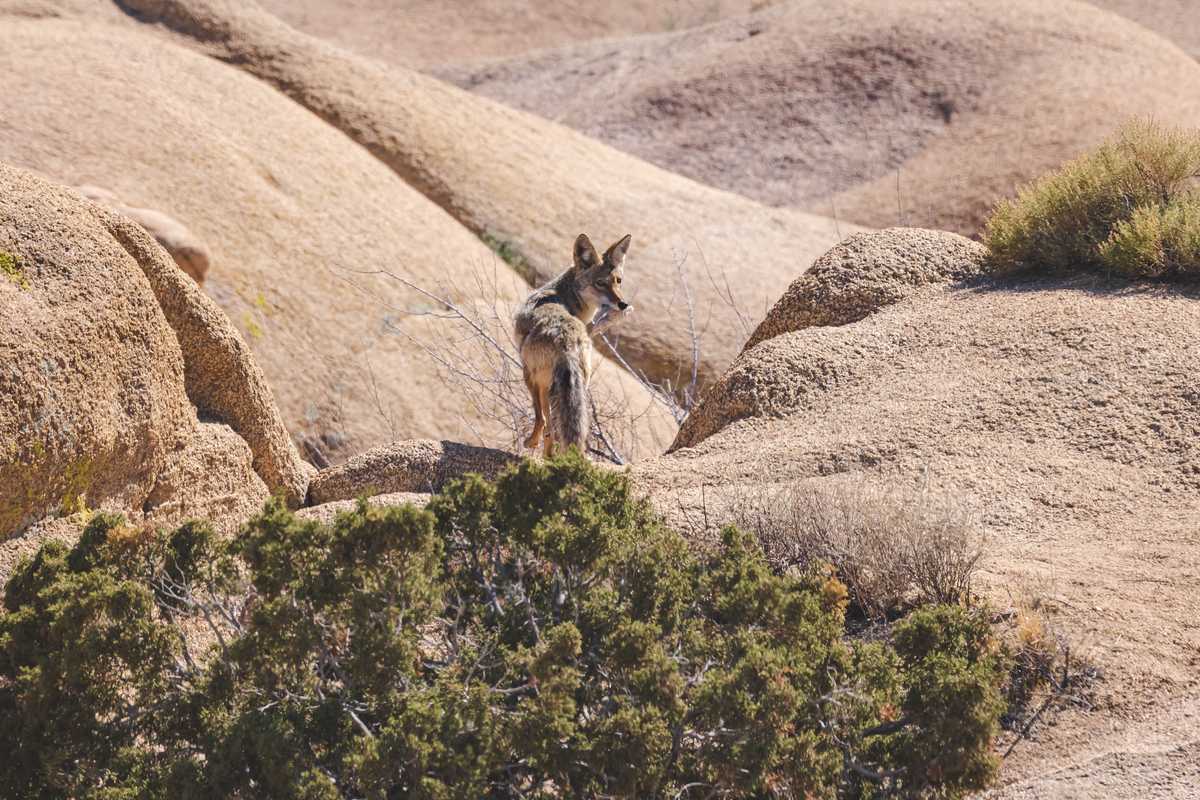 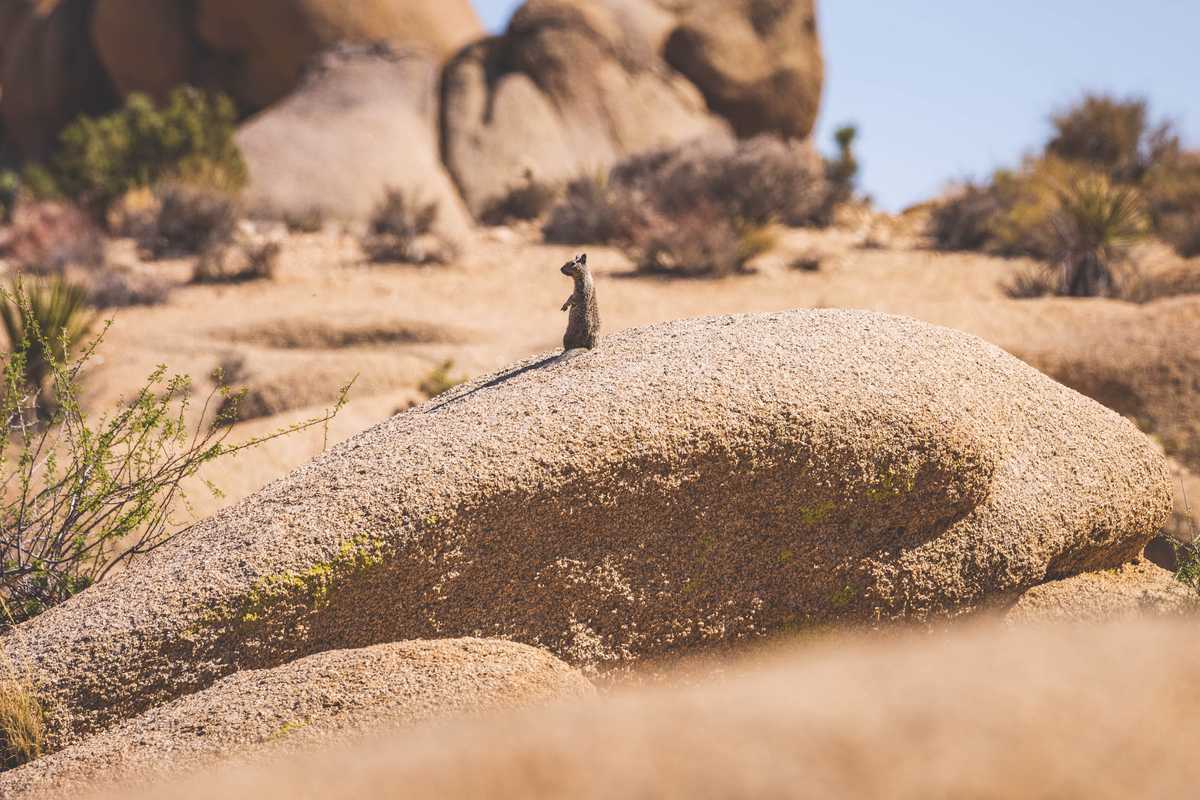 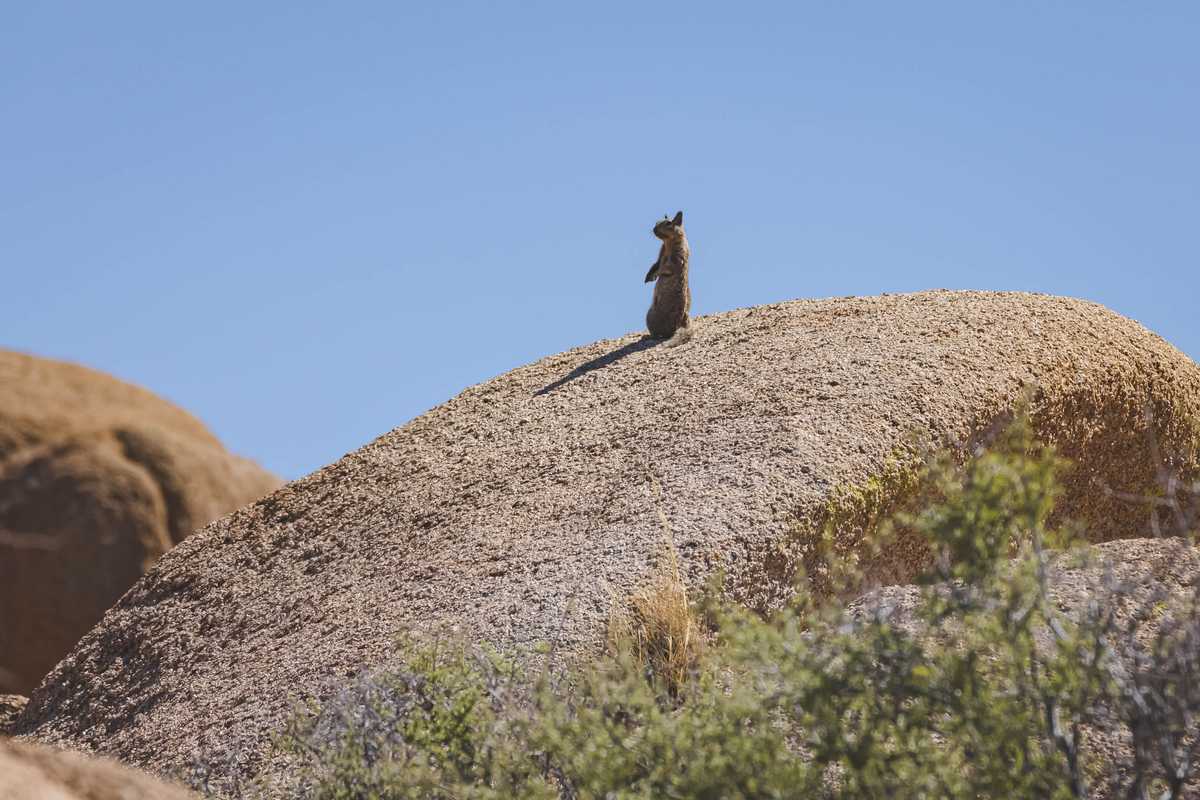 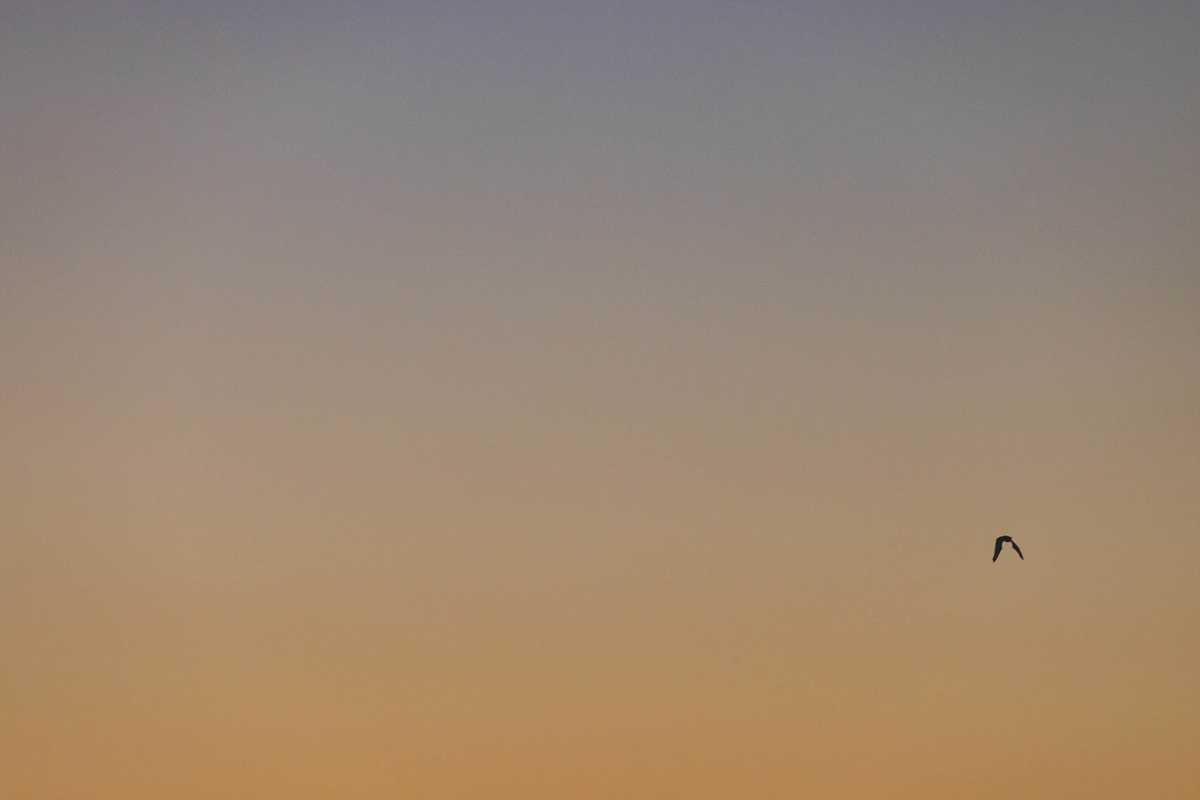 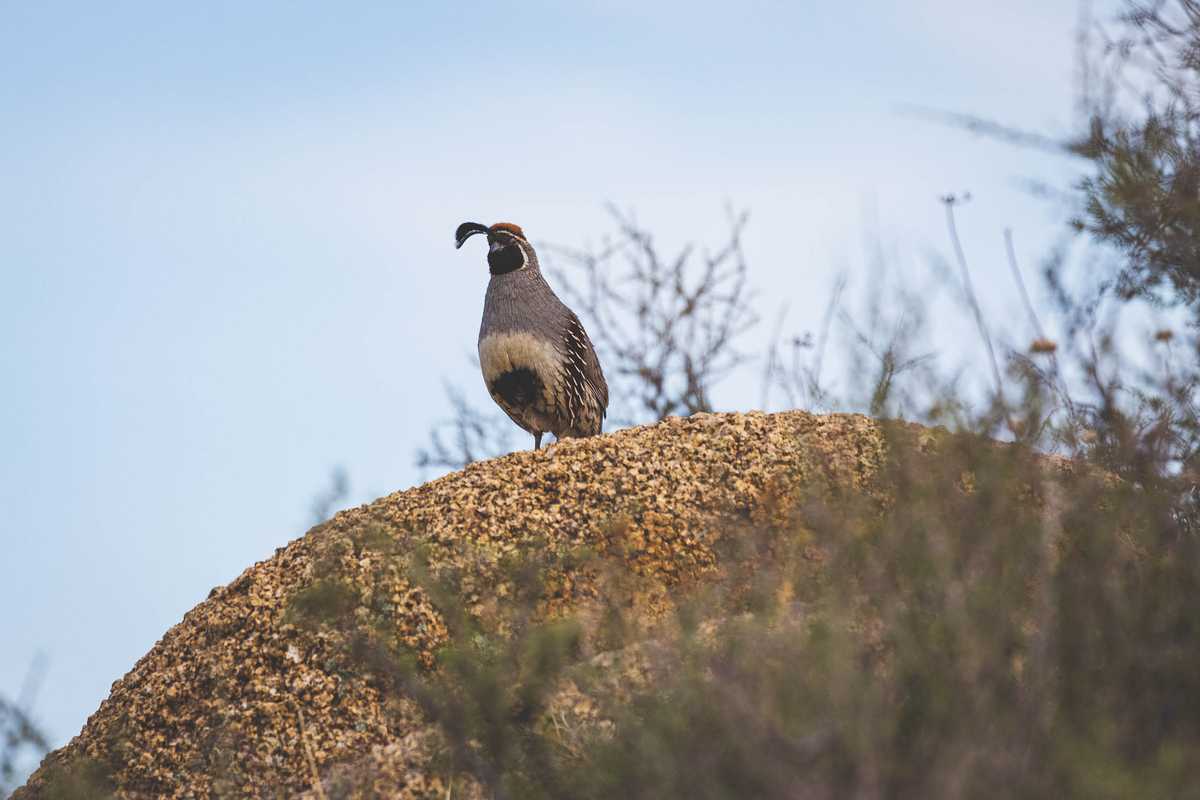 Sunrise and sunset in Joshua Tree are epic, spiritual experiences -- or maybe I was receptive because I was sleeping about four hours a night in the passenger seat of a Ford Ranger.

(I concluded my first night that I'm awful at sleeping in a tent, and it wasn't just inexperience on my other three or four camping trips prior to this one. I just can't get comfortable, can't turn the brain off, and even the definitely-not-awesome experience of sleeping in a car was an improvement. IMO, van lifers have it figured out.)

Light, sweeping into canyons, bringing a warm breeze and a colorful sky, revealing the massive rock formations and endless sweeping desert that were hidden in front of you, is a great reward for a 5am wakeup. Driving around Joshua Tree before dawn is as separate from my normal world as I've ever felt, with headlights shining off rock formations, unique plants, and more than a few sets of eyes off somewhere in the darkness as you wind your way through the park.

My favorite sunrise was at Cholla Cactus Garden, a unique little ecosystem densely packed with cacti as the Mojave and Sonoran Desert meet in a large basin visible from the parking lot. 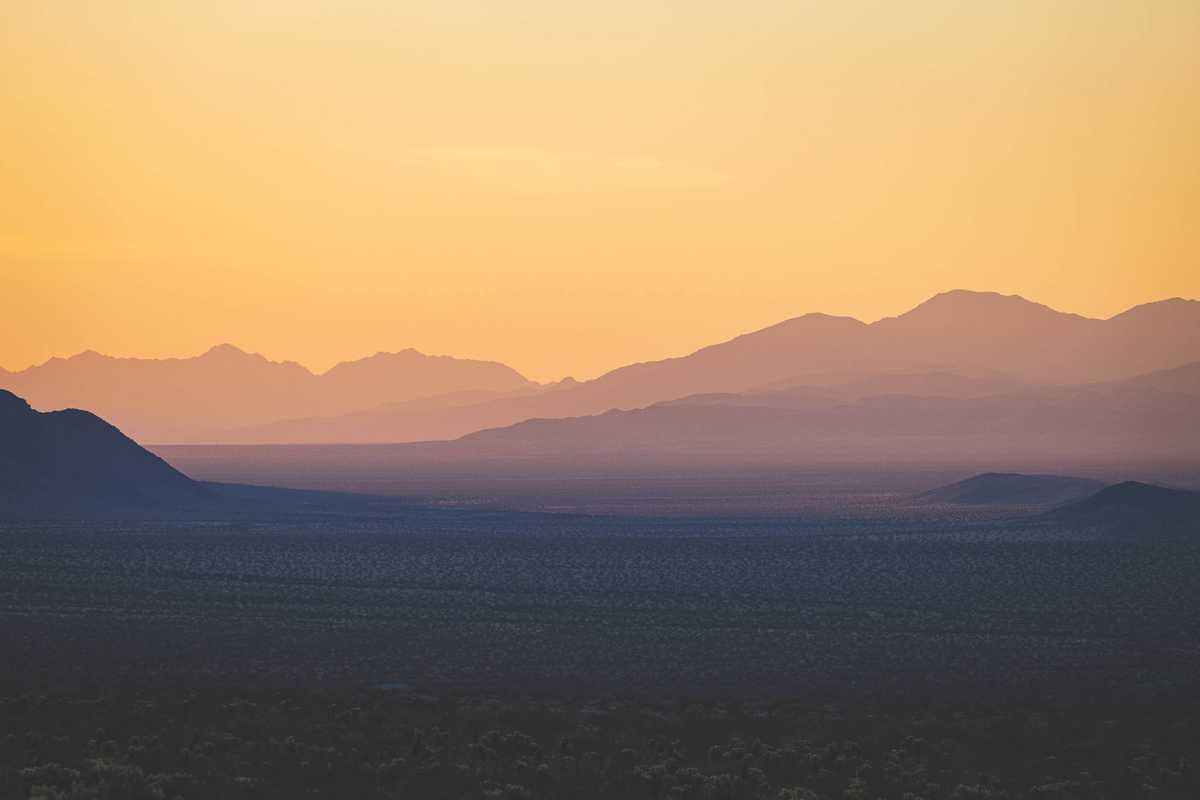 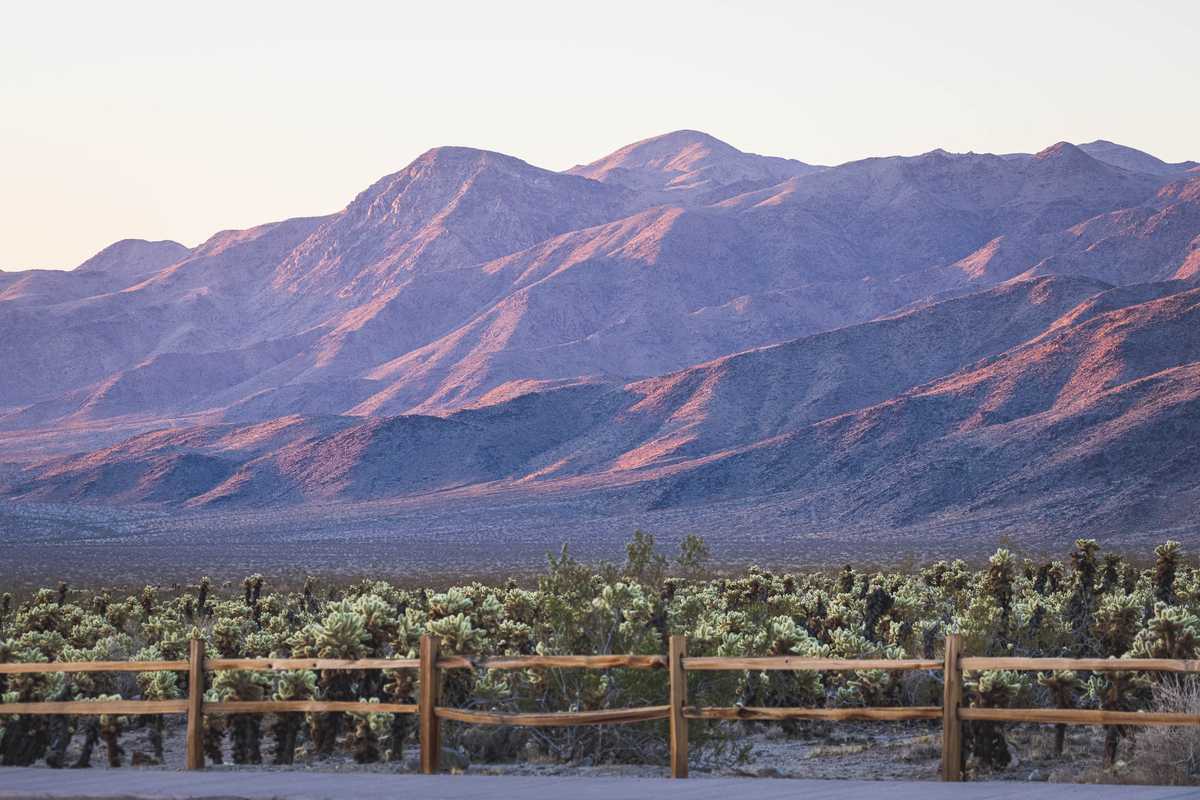 The same epic backgrounds that make daybreak amazing also make for incredible sunsets. Places like this, uninterrupted by buildings and roads, with huge sweeping vistas that stretch far into the distance, make for dramatic scenery for just about anything. The high mountains to the west mean that the sun provides an amazing, colorful, soft glow to the mountain peaks, which casts colorful shadows into the sky behind you. You can see those on two photos from Ryan Mountain above.

The rugged horizon also provided for another of my favorite shots from this trip, the moon rising above a rock formation along the road from Twentynine Palms to Jumbo Rocks Campground within the park. I was talking to Jenna on the phone before I lost service, griping about how I'd miss the lunar eclipse that night due to cloudy skies, when I noticed the moon shrouded in cloud rising from behind softly lit granite. Naturally I dramatically hung up, immediately swerved to the side of the road, and snapped a few photos, before realizing Jenna probably thought I got in an accident (she did, but I called back quickly). 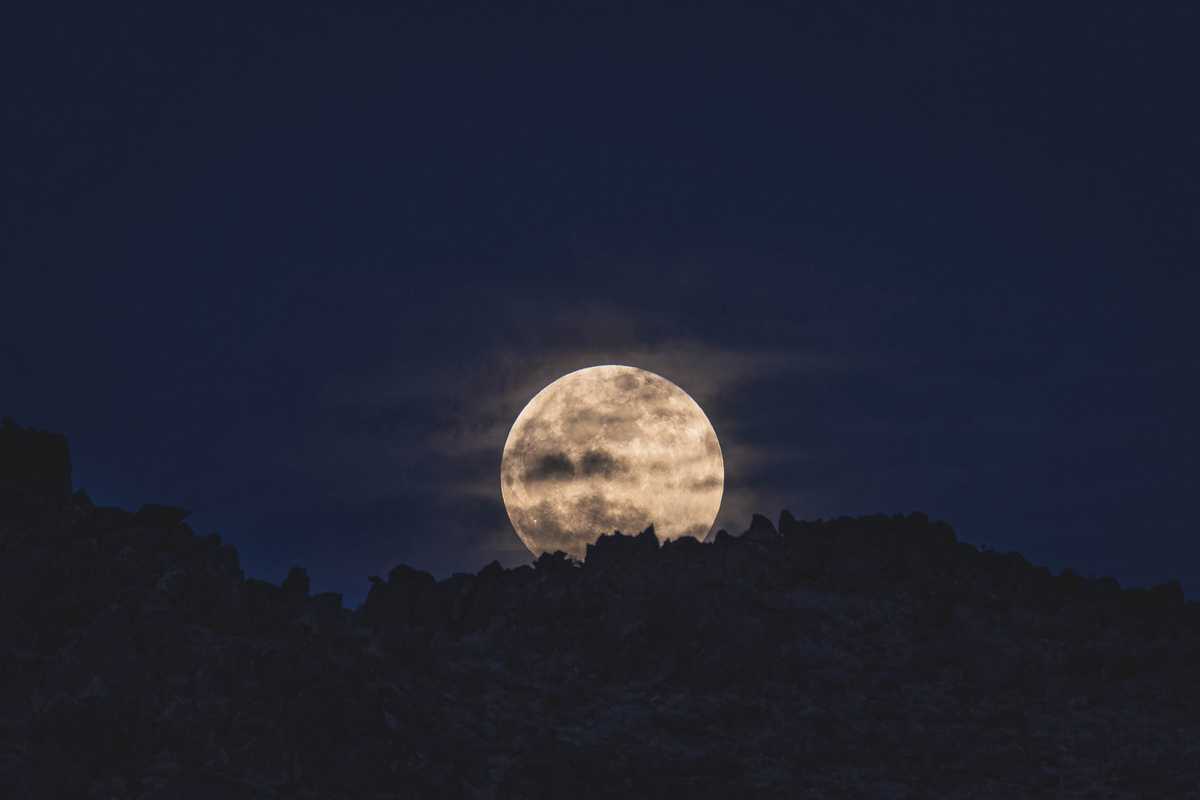 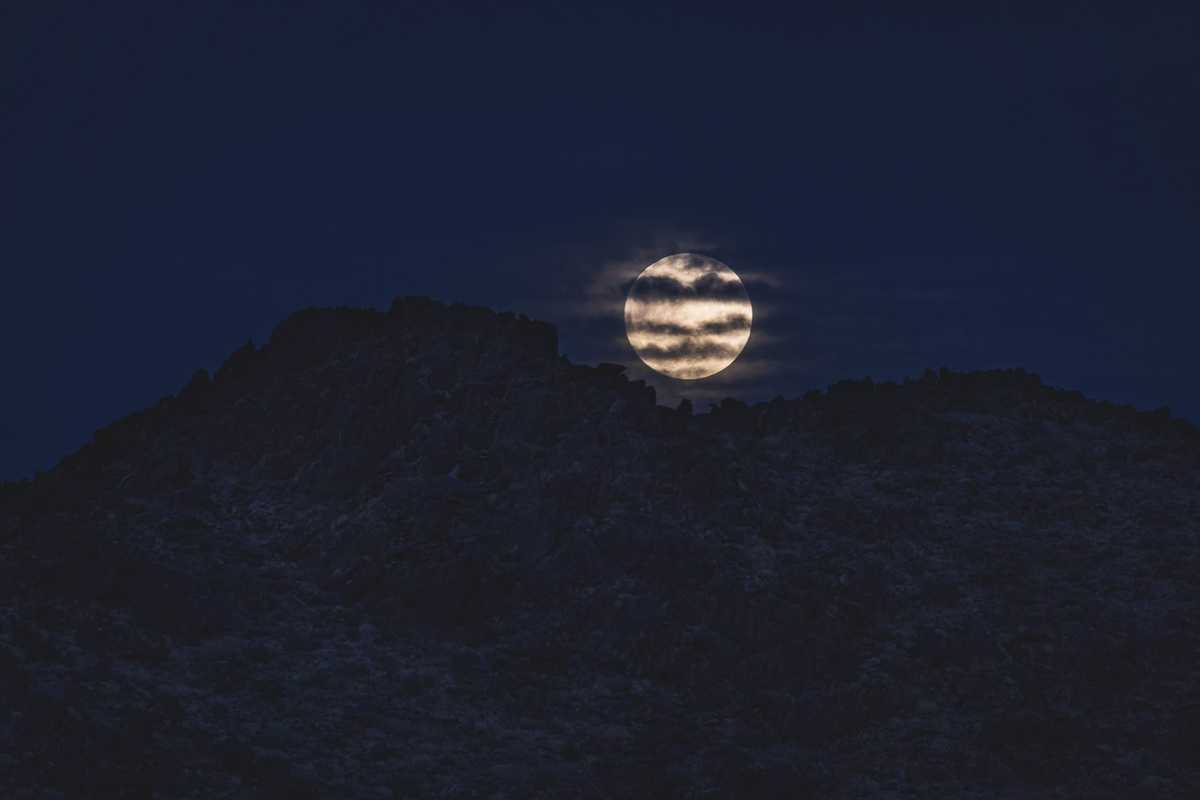 Anyway, it was all reflection, adventure, crisp desert air, and fulfillment until I slipped on a boulder and cut the side of my leg open on gritty rock, marking a trail of blood in the sand and leaving me with my campsite neighbor's two leftover bandaids and 10" of medical tape as the only first aid within reach (though I remain grateful for this!).

I had to drive 40 minutes to a Dollar General and then wash and bandage a wound in the parking lot of a strip mall. All of this caused me to drive back to Vegas with a throbbing leg a day sooner than expected in case everything became infected (it didn't!).

I now have a great first aid kit that comes with me everywhere. And a new scar. And these photos.

As I left the park, I swung by Key's View for one last sunrise. It's a small paved trail cut into the mountainside that overlooks the Coachella Valley opposite the San Jacinto Mountains. It was great to spend an hour in silence at the end of an adventure with a crisp wind watching the sun rose. You can see Palm Springs below, shining quietly before dawn, high mountains, sweeping desert valleys, and, kids, if you look to the southwest, you can make out the Salton Sea, one of America's premier environmental disasters! 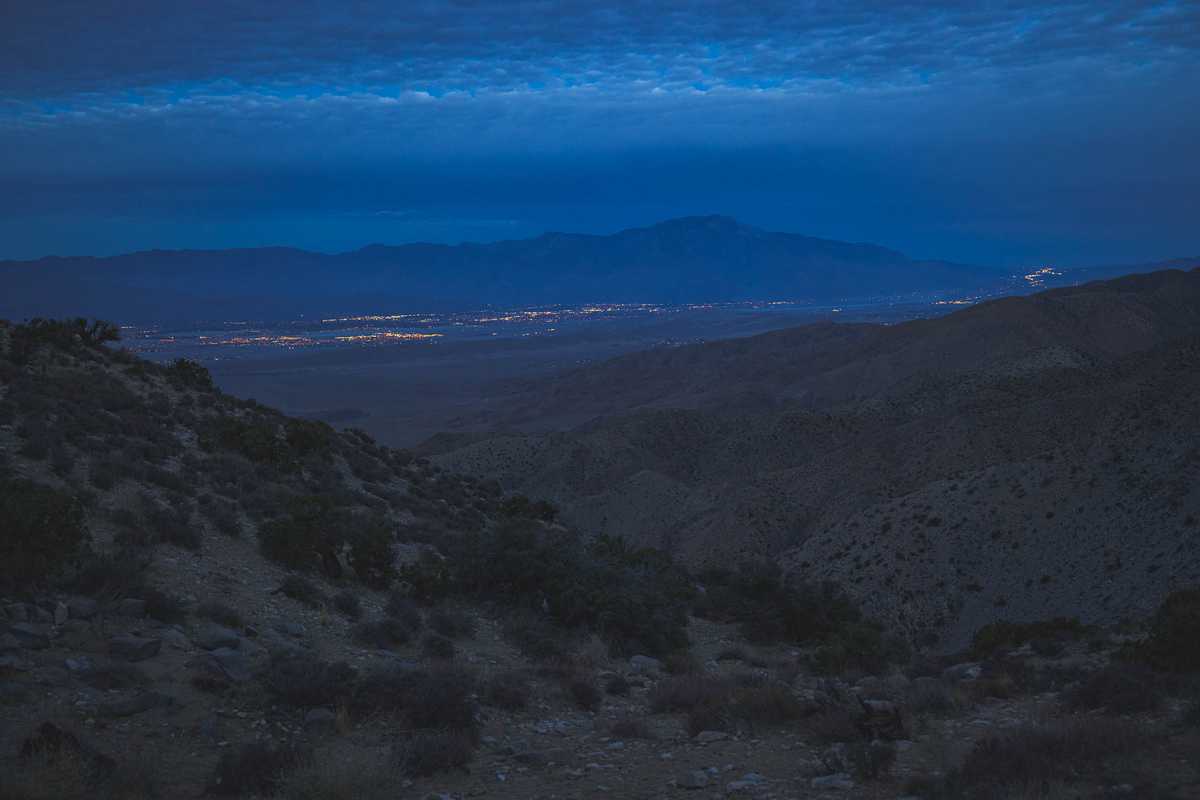 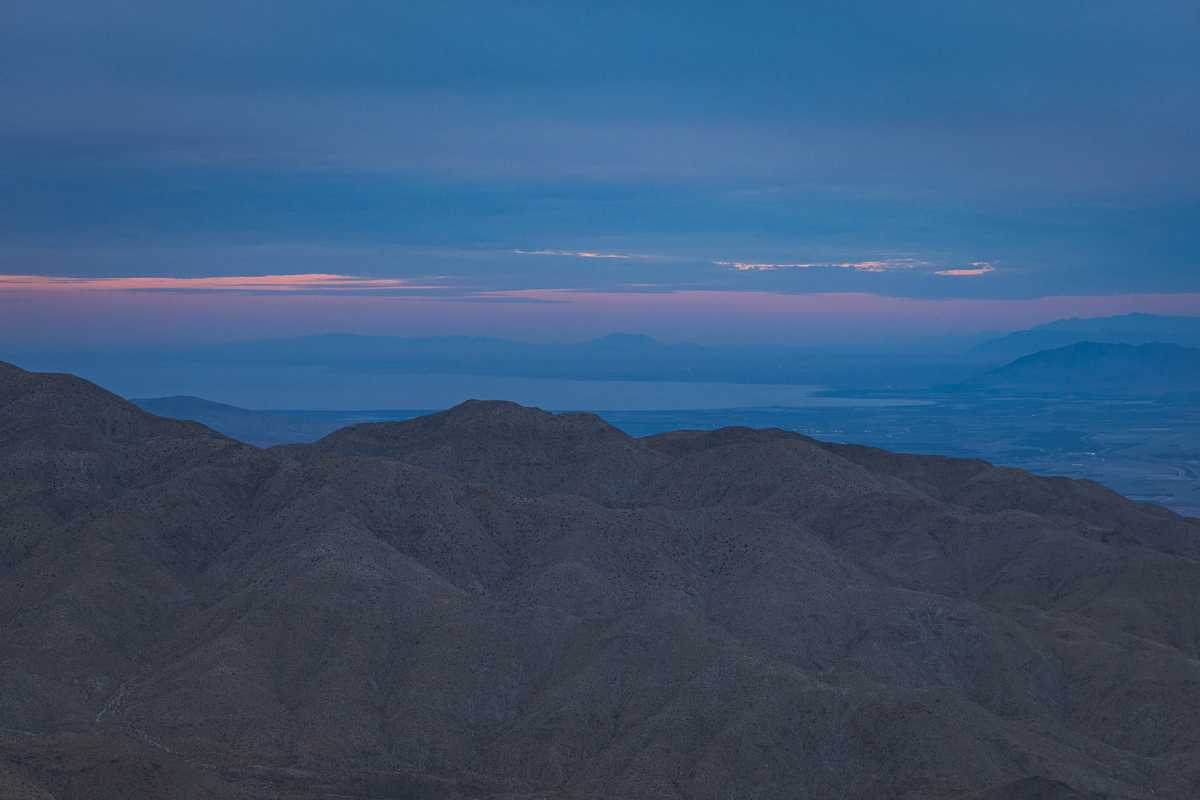 This visit to Joshua Tree will remain a very meaningful trip for me. It comes toward the start of a long sabbatical, taken so I can spend time with myself unfettered by stress and anxiety around money and work that I've carried since I was a kid. I can't imagine a better place to start that process than out in the desert in California, with echoes of so many of America's myths and histories, along a backdrop that has inspired people for thousands of years. I cannot wait to come back, and I cannot wait to explore more of the Southwest.