A last-minute drive to northern Michigan to take in the stars and sunrise on the shores of the Great Lakes.

If you’re interested in astrophotography, moon phases, light pollution, weather forecasts, and sunset times become a part of the daily routine. Everything comes down to perfect planning with no small amount of luck.

I’ve been eyeing Northwest Michigan for a few months now, one of the closest places with fairly dark skies to Chicago. And since my National Parks Pass had just arrived, Sleeping Bear Dunes National Lakeshore stood out as a good way to take advantage of my newly unlimited access.

But in typical fashion, I had the idea for this adventure, a roughly 6-hour drive from my home in Chicago, around 1pm on a Wednesday. I noticed a forecast for clear skies during a new moon that night, which was a perfect chance to spend a night outside looking at the universe. It also meant even without a guaranteed several hours of dawdling over useless details, I’d be lucky to arrive before sunset.

I was not lucky, or rather I didn’t try to be, and got there just as darkness was setting in. Still, I got my tent up quickly and sat at a picnic table to cook dinner, settling into a nice evening before heading to the shore of the lake to look up.

This was quickly interrupted after full darkness set in, when I happened to look down and my headlamp illuminated a large raccoon seated upright, directly next to me, calmly reaching for my plate like it had every reason in the world to be there. After some strong profanity, some hissing, and some chasing, I was able to carry on with the meal (I’ll leave it to you to decide who was doing what). I was just left with the impression that we both thought the other one was being very rude.

It was absolutely freezing now. I wore four layers but nothing with down and it was already nowhere near enough. By midnight I was doing lunges at the campsite to keep warm, but the wooded ~half mile walk to the shore got the blood pumping again (blood pumping also because I was anticipating further raccoon-related conflict, and our uneasy truce did in fact break down three more times this night).

At the shore, I had a much better vantage point than I expected. About 20 feet of sandy beach extend from the tree line, giving an amazing panoramic view of the Lake Michigan shoreline and surrounding area. You can hear waves washing over the beach that stretches for miles in either direction.

It’s still fairly early in the season for Milky Way spotting. During my first walk to the shore, it was nearly horizontal in the sky above a nearby small town. This looked amazing but was washing out the view somewhat.

After snapping a few dozen photos, I went back to the campsite for a nap before coming back out around 3am. With a few more hours to rise, I was greeted by a striking, obvious Milky Way in the sky over the trees, arcing clearly from horizon to horizon at about 60 degrees in the sky.

You can see the first signs of daybreak as the night progressed. In one photo, I yeeted my ISO way higher than I normally would, and captured an atmospheric glow that might be a faint aurora.

The last picture showing the Milky Way fading in the first light of day also features a special guest…the ISS streaking about 250 miles overhead. What an amazing way to end the night. 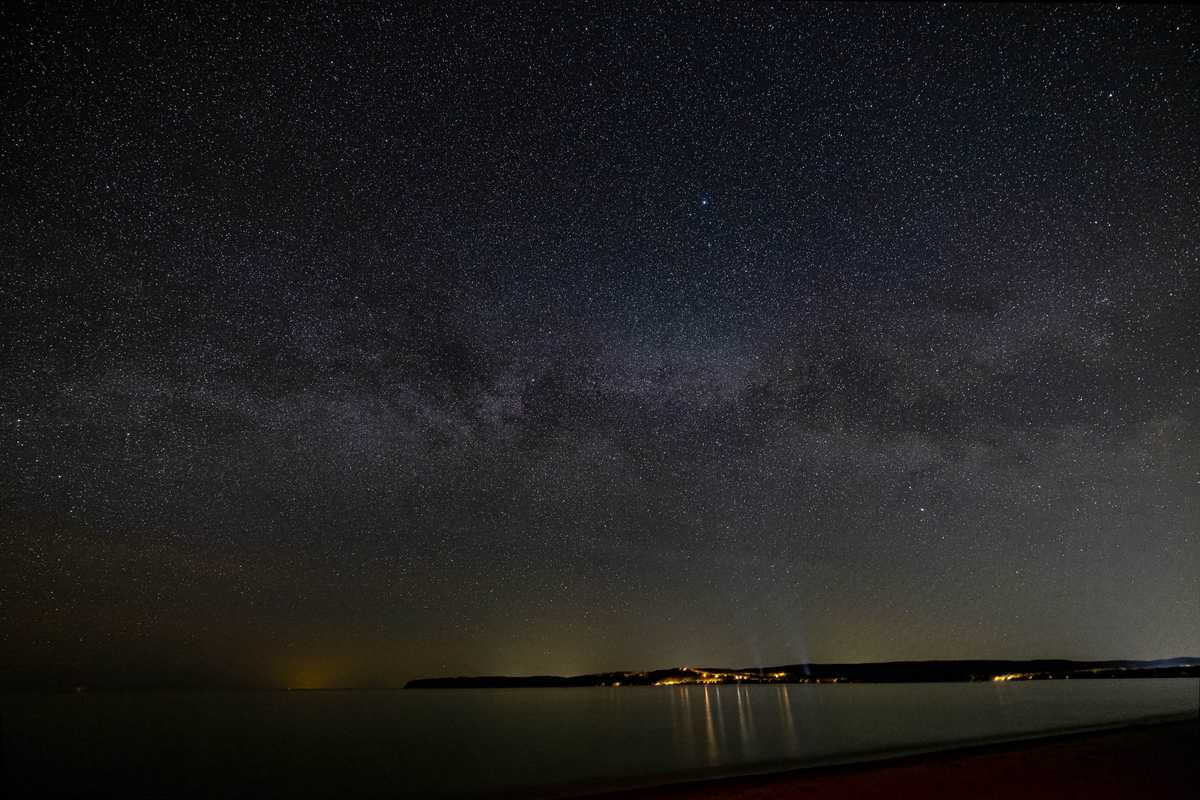 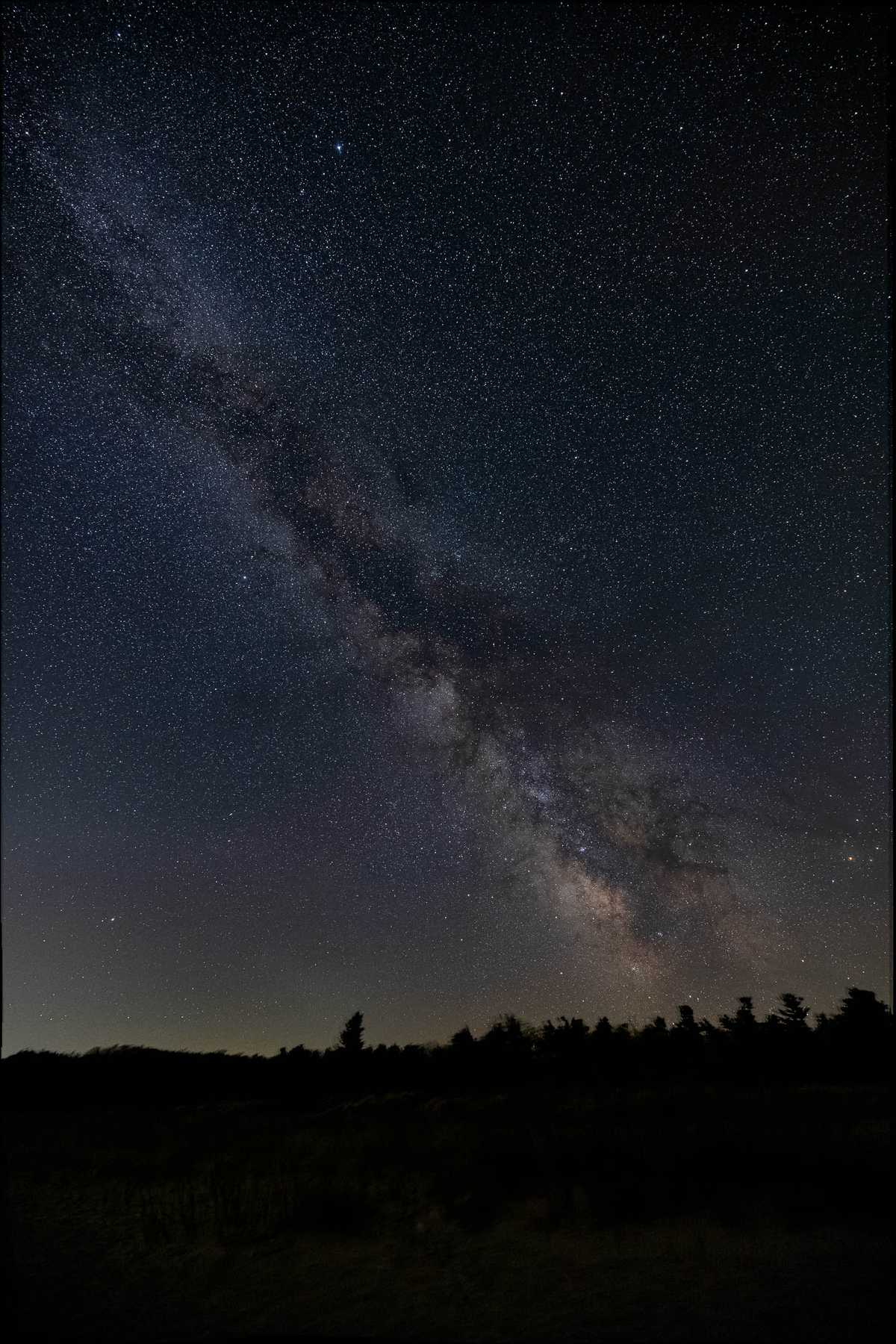 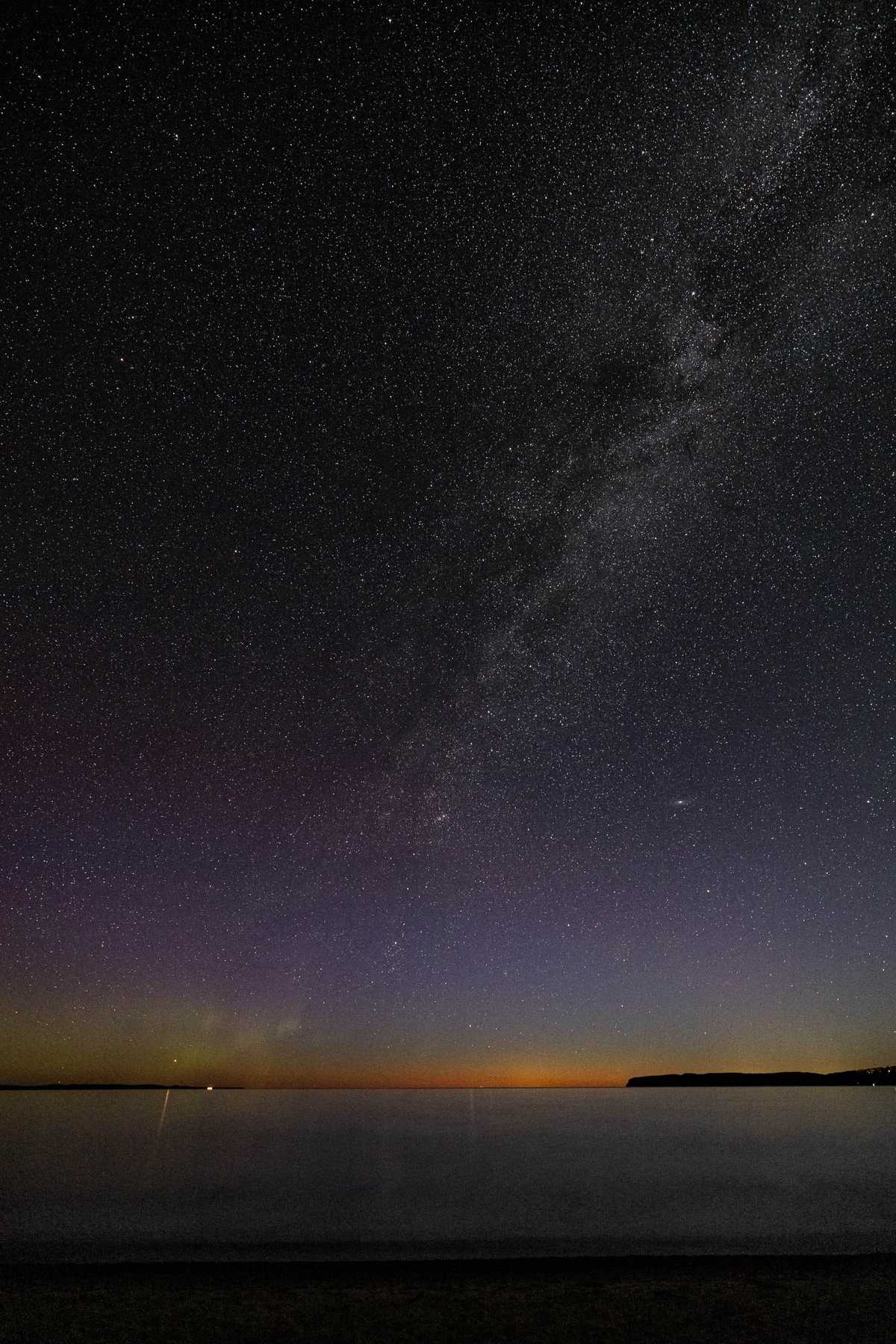 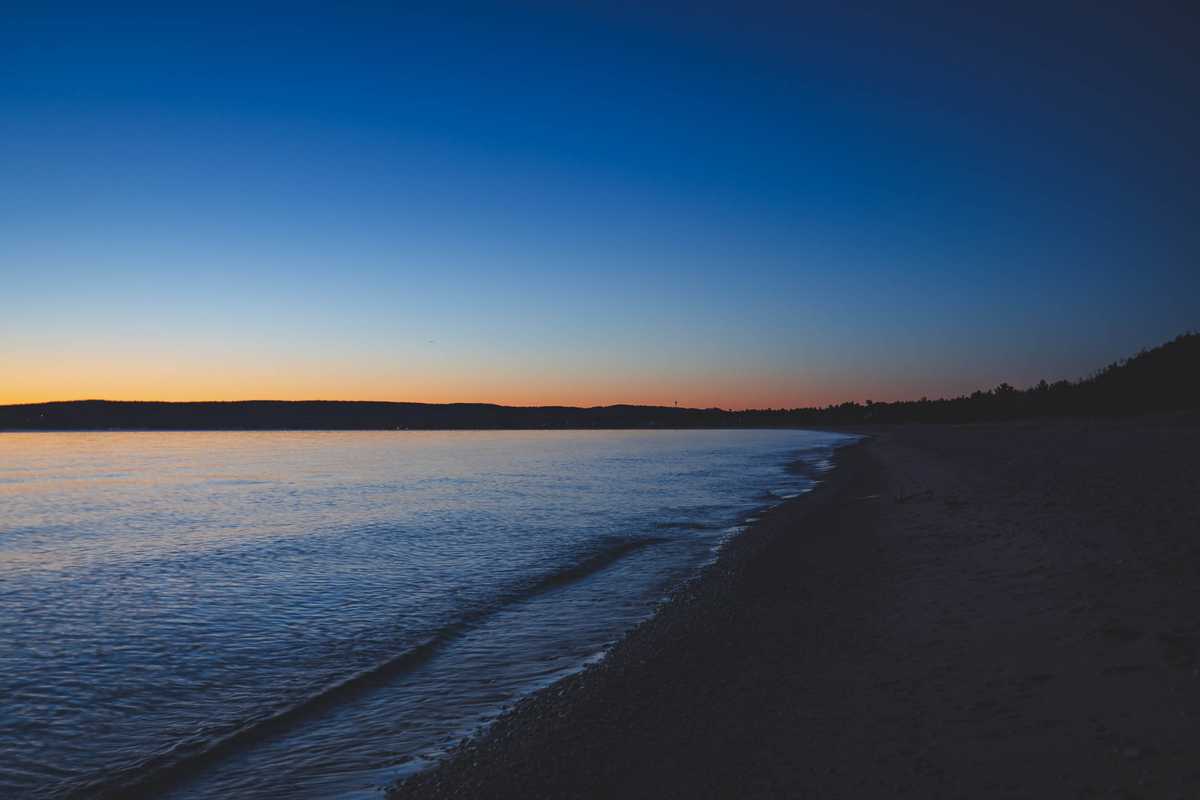 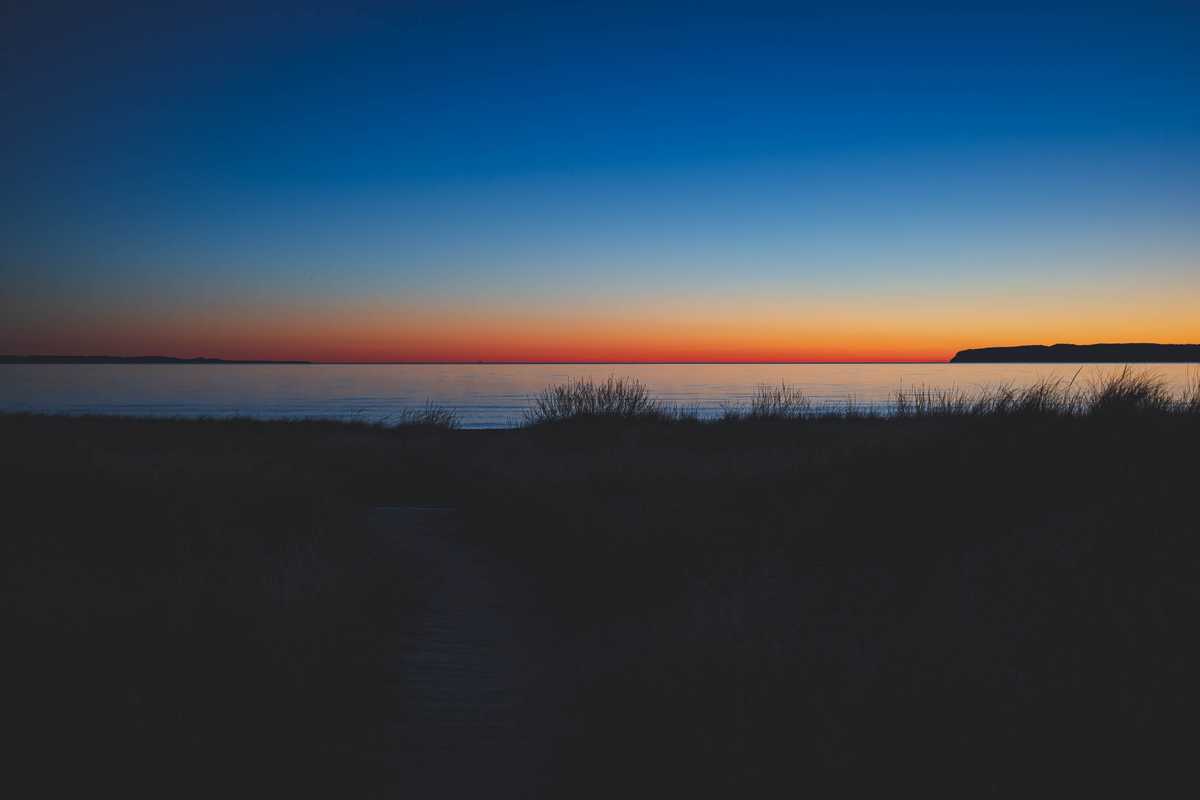 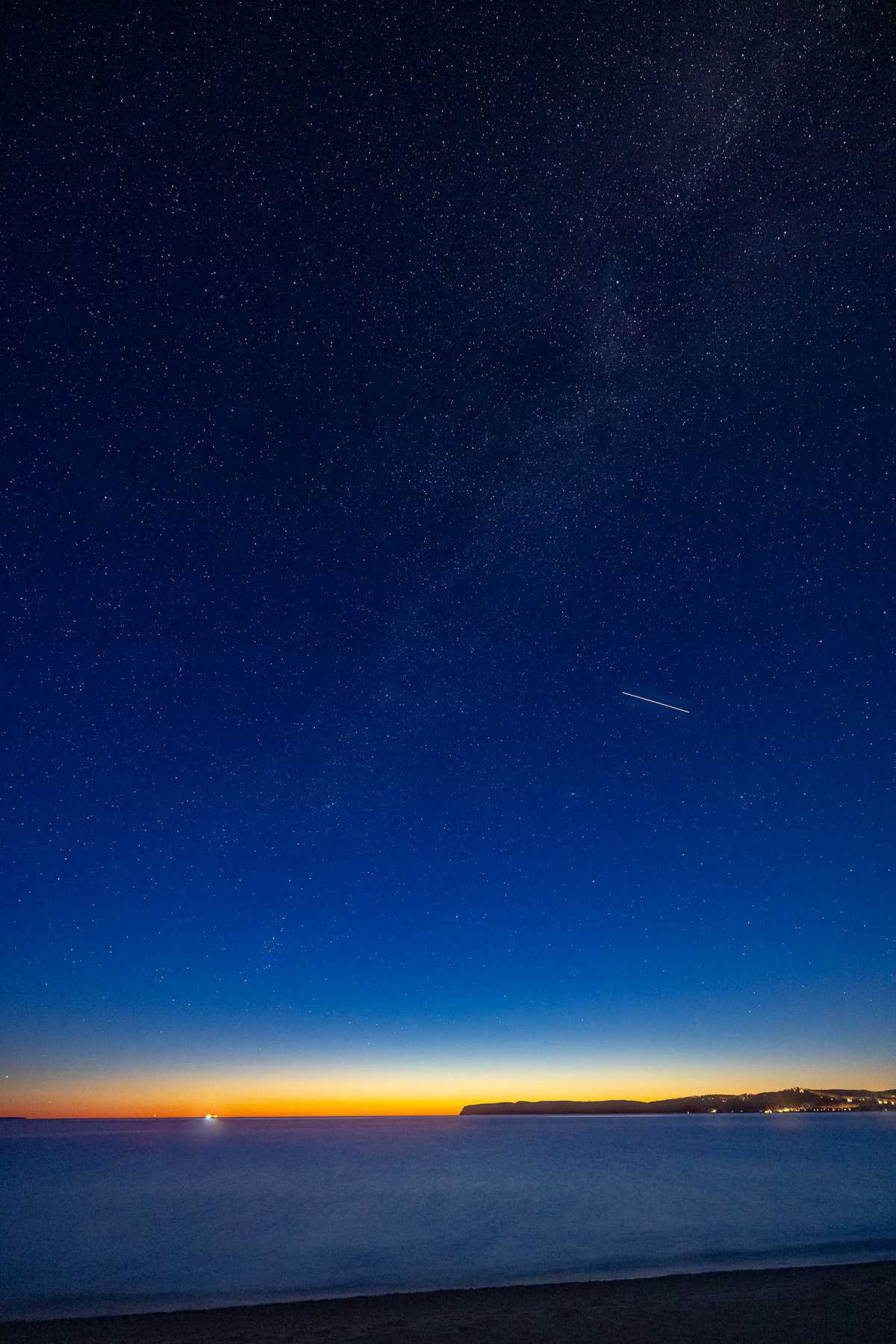